100 years of leadership in pediatric orthopedics and prosthetics

In the early 20th century, few hospitals existed to help children with disabling differences in the bones, muscles and joints. When the Shriners International men’s fraternity opened its first hospital in 1922, that began to change. As we mark a full century of serving children, here is a look back at how Shriners Children’s has led the way in orthopedic care and prosthetics.

“I recall that nearly all the patients were children 10 to 12 years of age and were very badly deformed because they had never received any medical care,” wrote John McGilvray in his book, The Shriners Finest Hour, about the Shriners Hospital in San Francisco, which opened in 1923. McGilvray, who specialized in granite for construction projects, was one of the original planners of the Shriners healthcare system. He was also a building consultant on 17 of our locations and provided their cornerstones.

At that time, patients often spent a year or more at what was then called Shriners Hospitals for Crippled Children, living in separate boys’ and girls’ wards, supervised by nurses who lived onsite. Among the conditions treated were “clubfeet, curved spines, tubercular spines and joints, infantile paralysis, and such diseases and deformities that come within the scope and province of orthopedic surgery,” wrote McGilvray.

By 1932, Shriners hospitals had helped transform the lives of 35,000 children. A Shriners report at the time said, “The hospitals are equipped with every modern appliance for assisting skillful surgery.” Hospitals had physiotherapy pools (a large portable bathtub) for aquatic therapy and iron lungs to help polio patients. In addition to providing clinical care, hospital staff brought joy and laughter to the patients through sports, play and acceptance. As much as possible, children enjoyed time outside on well-kept grounds.

Even in those early days, Shriners Children’s provided custom braces at no cost to families. The brace makers were skilled craftsmen. One of them, August “Gus” Dreher, had a brace shop in the basement of the Chicago hospital. His family had made prosthetics and orthotics as blacksmiths and leather workers in Germany, as far back as the 16th century. “We literally had a forge in the back of our (hospital) shop. They would take a chunk of metal and forge parts for braces,” said Gus’ grandson, Peter Dreher. “The prosthetic sockets were all done in wood and carved by hand.”

The next decade brought the Great Depression, and the increasing incidences of poverty and malnutrition caused a rise in orthopedic-related diseases such as rickets, creating a nationwide demand for care. Physicians worked without pay, supporting themselves in private practice in the community, while seeking to advance orthopedic knowledge and treatment. 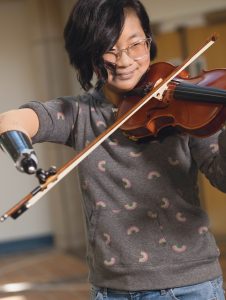 Patients are able to do what they love because of prosthetic devices.

Shaping the study of pediatric orthopedics

There were few medical residencies specializing in treating orthopedic conditions, so Shriners Children’s physicians helped establish them. For instance, Shriners Children’s St. Louis formed a partnership with the Washington University School of Medicine in 1924, which continues to this day. Physicians are faculty members at the medical school, and they share their time to provide care at Shriners Children’s.

The tradition of teaching continues to this day. “Over the years, the majority of pediatric orthopedic surgeons received at least part of their education and training at Shriners Children’s,” said Jerry G. Gantt, current chairman of Shriners Children’s Board of Trustees.

In the 1950s, vaccines gradually eradicated polio in the U.S., and new antibiotics reduced the number of bone infections. Shriners Children’s focus included conducting research to advance treatment and collaborating around specific conditions. Dr. Sofield developed the first surgically successful treatment for brittle bone disorders. Orthopedists from around the world visited to learn his technique. Dr. Sofield and other Shriners Children’s orthopedists helped launch the Orthopedic Research and Education Foundation.

In 1969, Douglas McKay, M.D., of Shriners Children’s Shreveport, hosted the first meeting of what became POSNA in a hotel room. Also included were Frank Stelling, M.D., chief surgeon at Shriners Children’s Greenville, and Burr Curtis, M.D., a member of the Shriners Children’s Medical Advisory Board. These names are among the many past and present physicians recognized as national and international leaders in their respective fields.

Better overall healthcare for children meant the average length of hospital stays decreased dramatically, but orthopedic injuries still often involved several weeks in the hospital. Jeffrey Ackman, M.D., began his career with Shriners Children’s Chicago in June 1989. “We used to bring a child with a femur fracture into the hospital and put them in traction for several weeks until the fracture started healing. Then we’d put the child in a cast and send them home. That imposed a big burden on the family,” Dr. Ackman said. “Someone had to take off work to stay with the child. They were missing school. Now we’re much more likely to do a surgery that allows the child to leave the hospital and heal at home.”

The 1990s were a time of change and of continued innovation. Surgeries that once required long stays were now achieved with same-day surgery with the family heading home that same afternoon. This dramatic shift in medicine led some locations to begin to focus entirely on outpatient services a couple of decades later.

Medical innovations continued to be a hallmark of the Shriners healthcare system. For example, the Philadelphia Shriners Children’s location was one of only seven sites in the world to pioneer titanium rib surgery in 1991, at the time, a groundbreaking technique to halt progression of scoliosis.

In 2015, Philadelphia Shriners surgeons Scott Kozin, M.D., and Dan Zlotolow, M.D., participated in the world’s first pediatric hand transplant. The plastic surgery service at the Chicago location developed a 3D virtual surgical planning platform that is now used by doctors in other institutions. Recent advances at Shriners Children’s in vertebral body tethering are changing the lives of patients with spine conditions.

Today Shriners Children’s locations routinely treat more than 100 orthopedic conditions and care for more than 100,000 patients per year. Our care has expanded beyond our buildings and borders through telehealth and outreach clinics. Five of our locations that are affiliated with educational healthcare systems were rated in the top 50 pediatric orthopedic programs for 2021 in the United States by U.S. News and World Report.

As we begin our second century of caring for children with orthopedic conditions, we are guided by the same mission established in the beginning. Our patients are our first priority as we provide care, conduct research and offer education for medical professionals.