With the help of a custom leg, Daisy is training to compete in mixed martial arts.

In addition to providing top-notch medical care, our staff is committed to helping our young patients develop confidence and discover and pursue their goals. For many patients, learning they can participate in sports, despite their medical issues, opens a new world of hope and opportunity.

She’s Daisy, a middle schooler, all-around athlete and a patient of Shriners Hospitals for Children — Spokane, where she receives treatment and support that helps her work toward her dreams.

Daisy loves to stay active. “I do softball, Little League baseball, volleyball, basketball, anything outside really,” she said.

Daisy’s parents adopted her from China when she was 6. Daisy was born missing part of her left leg, and her left hand was underdeveloped. Before they brought her home, her parents knew that Shriners Hospitals could help their daughter.

“My hand was not actually spread apart, it was webbed together,” Daisy explained. “I had three surgeries on my hand to separate the thumb and the middle finger and the pinky. After my last hand surgery, I had a big leg surgery done.”

To help Daisy pursue her goals with MMA, her prosthetist suggested a running foot.

“I couldn’t name another amputee that I’ve worked with who wanted to do mixed martial arts,” said Peter Springs, L/PO, pediatric orthotic and prosthetic services manager at the hospital. “You try to adapt to what their desires are and what they want to accomplish.”

“I remember the first time she walked in the hall and ended up going on a little jog with it,” Springs said. When she tried to describe the experience, he could tell “it was a different category of better for her.”

Now Daisy is a regular at a local gym, where she works on her own training and coaches younger kids. In the process, she’s knocking down preconceived notions about what she can accomplish.

“We thought it would be a little challenging with her limitations, but it hasn’t been at all. We don’t even notice,” her father said. “It’s just a part of her.”

Working with Daisy has been a revelation for her coach, Sarah Howell, owner of Wolfpack Fitness in Pasco, Washington. “She wants to be pushed, she wants to be challenged, and she’s perfectly fine and capable of doing anything that you throw at her,” said Howell. “So eventually my attitude changed as a coach.”

With hopes of competing in MMA in the future, Daisy and her family are working through the rules concerning the use of her prosthetic. In the meantime, she is dedicated to increasing her skills and helping other kids improve as well.

“A lot of people underestimate my ability to push myself harder,” Daisy said, “but I feel like I can do anything that I can put my mind to.” 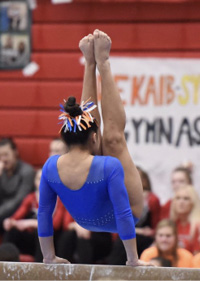 Facing the judges, the freshman gymnast projects confidence. An inner discipline prevents her from showing any weakness.

“I take a deep breath, and I know I’m going to be solid,” she said.

She smiles and steps up to the balance beam. For Sol, competition for the state title has begun.

Like many gymnasts, Sol began participating in the sport at a young age. But unlike others, by the time her mom enrolled her in gymnastics at 31/2 years old, Sol had already had foot surgery twice. She learned to walk wearing a cast.

Sol was born with her left foot turned inward. The congenital condition, known as clubfoot, is caused when the tendons connecting leg muscles to the foot are shortened and tight. This affects the positioning of one or both feet and, if left untreated, may affect the ability to walk.

“Whenever a parent knows their child has a disability, they should listen to their gut and pursue the best care for their child,” Sol’s mother, Elda, said. “You don’t know how much the disability is limiting them – or not limiting them.”

With a reliance on research and a focus on best outcomes for patients, Shriners Hospitals for Children was exactly where Elda wanted Sol to be. Treatments are customized to the patient and include both surgical and non-surgical interventions. The Chicago Shriners Hospital has an in-house motion analysis center that doctors used to identify the best treatment for Sol’s clubfoot, based on how her leg and foot actually moved. In addition, the hospital has provided Sol with follow-up care over the years for other injuries related to her sport.

Treatment allowed Sol to take to the mat and pursue her passion. “Gymnastics is an escape for me,” she said. “I get to release my energy and express the hidden talent that I have.”

Competing in USA Gymnastics events for years, Sol had a demanding schedule: 20 hours a week in the gym, plus accelerated classes at school. But, having broad interests and limited time, Sol opted to make a change, joining her high school’s gymnastics team.

The switch opened up time for school, social activity and a new sport – track and field – where coaches saw her athleticism and encouraged her to try pole vaulting.

“I feel like I’ve had a lot of success and nothing can stop me, not even the surgeries.” 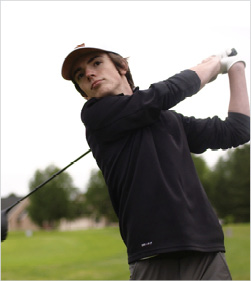 Matthew golfs at charity tournaments in his area.

Like most golfers, Matthew, 16, is in pursuit of that day when it all comes together: the drives, the putts and the intensity that brings focus rather than stress.

He plays for his high school team, practicing every other day and sometimes joining his dad as a player or volunteer at area charity golf tournaments. And now, with the treatment he’s received in the past year from Shriners Hospitals for Children — Portland, he’s ready to reach for the next level.

In 2018, Matthew was diagnosed with scoliosis. His treatment plan, provided by Michelle Welborn, M.D., included wearing a brace for 20 hours a day for seven months. This past March, his mother said, X-rays showed his growth plates had closed and the teen received the green light for surgery in early April.

Matthew said his support network, along with his faith, helped him power through. “For me, it was about wearing the brace and how it would feel, how it would look, and how I would look,” he said. “My family, teachers and friends were so encouraging and supportive.”

Add to that: trust in his medical team, particularly Dr. Welborn, whose focus is on pediatric spinal deformity. “Dr. Welborn was absolutely awesome,” Matthew said. “I couldn’t not trust her!”

Matthew confirmed that having his scoliosis corrected has had a positive impact on his life. “The surgery has helped to level out my shoulders, which has greatly improved my golf swing,” he said. “Also, I don’t feel as insecure when swimming.”

As a student athlete, Matthew’s plate is full this school year. He said his favorite classes are science-related. “I’m looking forward to Honors Chemistry. I love to ask ‘Why?’ and science encourages you to do that!”

Matthew will represent the Portland hospital as a patient ambassador at the Shriners Hospitals for Children Open, held in Las Vegas Sept. 30 – Oct. 6. The FedExCup tournament features some of the world’s top golfers. Patient ambassadors get to meet and interact with the athletes and make memories to last a lifetime.

In addition, Matthew started his high school’s cornhole club, and he plans to play ultimate Frisbee. “I like team sports,” he said. “That’s another reason I like golf: I’m playing against myself, but I can earn points for the team. A win-win for sure.”

Matthew’s mom, Jennifer, has focused on encouraging her son. “Let him try new things,” she said. “Let him fail, too. Kids are so much more resilient than we sometimes think.”

Worries about her child’s future health come with the territory. But Jennifer said her family focuses on the long game. “We’re just like any other parents. We want Matthew to pursue what he loves and be a blessing to others,” she said.

“After one of our recent checkups at Shriners Hospital, we walked around the building and found ourselves on the rooftop playground. Up there, we also saw several empty plaques that were naming opportunities for a future donor. After I explained what that meant, Matthew said he wanted to come back someday and donate enough money to sponsor one of the play spaces. I have no doubt he will make good on that.”