After remarkable recoveries, athletes Parker and Katherine are giving back as National Patient Ambassadors 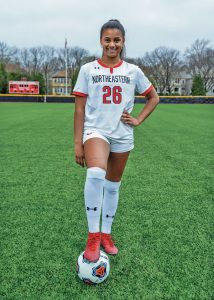 Katherine has reached her dream of being a collegiate athlete after recovering from burn injuries sustained in a car accident.

Katherine, 19, is a student at Northeastern University in Boston, where she majors in nursing and plays on the Division 1 soccer team. After a devastating car accident in 2019, she wasn’t sure she’d make it to this point.

“We were told that, without the surgery, I was at risk of amputation from the knee down,” Katherine said.

The teenager was hospitalized for a month. During that time, she had six surgeries and procedures, and worked at physical and occupational therapy daily.

A soccer player since she was 3, Katherine had committed to playing at Northeastern University when she was just 15. To help Katherine achieve her athletic goals and get back to playing the sport she loves, Shriners Children’s therapists focused on mobility, endurance, strength and range of motion. 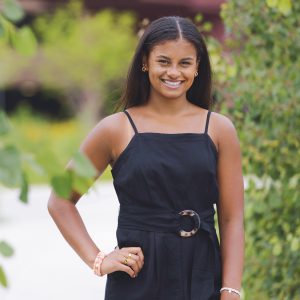 “I worked countless hours with my nurses, physical therapy staff and child life services to get to a point where I could go home,” Katherine said. “Every day I met with my occupational therapist, Courtney. Courtney was by my side every step of the way. She started by helping me take my first steps with a walker and finished by coming to watch my first game back after the accident. The staff at Shriners Children’s makes sure you never feel like you are going through anything alone.”

After transitioning to outpatient care, a focus was on laser surgery. “The best part about these surgeries is they are not required, but I am allowed to do as many as I want as long as they are four months apart,” Katherine said.

“I have seen a huge difference in the appearance, texture and mobility of my leg,” Katherine said. “Each time I return and meet with my surgical team, I am able to indicate a region that I would like them to focus on to offer the most comfort and success on the field.”

Inspired to give back, Katherine has organized donation drives in her community and is eager to serve as a National Patient Ambassador for the healthcare system. “When everything seems to be going wrong, look for the good things that came out of it,” she said. “For me, it was the people I met throughout my journey.

“Between other patients who will forever be my friends, or staff who I look up to, Shriners Children’s will always be family, my home away from home.” 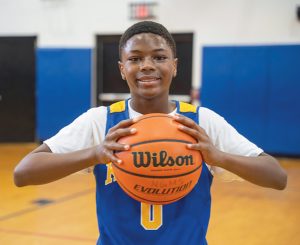 Parker had his leg amputated after a car accident, but he’s now back to playing the sports he loves.

Back on the court with confidence

Parker was 10 when his life changed forever. In the car on the way to school, Parker’s mom, Sharonda, had a seizure and lost consciousness. “When Parker realized something was wrong, he unbuckled his seat belt and got to the front to take over the wheel,” Sharonda said. Her son’s courageous action helped steer them away from oncoming traffic before crashing. “He saved our lives.”

Parker was severely injured in the crash, with damage to his internal organs that required him to be put on life support for a time. Among his other serious injuries, Parker suffered a badly broken ankle. When he learned that his leg would need to be amputated due to the injury, the athletic youth was devastated.

Three months later, Parker became a patient of Shriners Children’s Greenville, where a skilled team began working to help Parker get back to participating in the activities he loves. He was fitted with a prosthetic leg designed for comfortable support and lots of physical activity.

Now 13, “Parker is as strong as ever,” said Sharonda. “He rides bikes and four-wheelers with his friends. He plays basketball on his middle school team.” 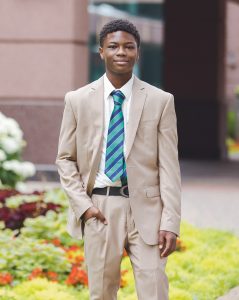 His favorite sports are baseball and basketball, and he enjoys playing video games. On social media, his favorite accounts to follow are all sports-related.

Sharonda had to tell her son he needed an amputation. “The disappointment on his face broke my heart,” she said. “But I noticed one thing: Parker didn’t cry too long. Parker perseveres with a positive outlook, and thanks to Shriners Children’s, now he’s limitless!”

Parker, who said he is good at being helpful to others, is pleased to be a National Patient Ambassador. “I can give back a small portion to Shriners Children’s, which has given me a great deal of my life back,” he said. “I want the next child who might be going through the same situation to know there are people to support you, and you’re not alone.”

“A hero, to me, is a person who, no matter what, does as much as they possibly can to make sure everything stays intact,” Parker said. “That’s exactly what I want to make sure I do – for not only my mom and my brother, but everyone who is ever around me.”

To view Katherine and Parker’s inspiring video, Back in the Game, visit bit.ly/BackInTheGameVideo.