Rilynn gets new legs for the new school year

“I’m really excited to go into kindergarten with some tall legs,” said Rilynn. “I think they can take me all over the world.” 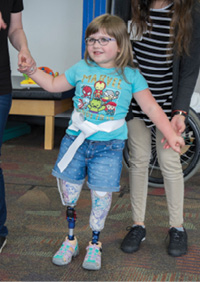 Rilynn tries out her prosthetic legs, complete with her favorite Little Mermaid theme.

Rilynn, a patient at Shriners Hospitals for Children — Portland, was born with tibial hemimelia in both legs, a condition in which the tibia bone (lower leg) is shortened or absent. When Rilynn was old enough to walk, she received her first pair of “stubbies,” hard sockets that level her legs and allow her to walk, but didn’t have a knee or foot. Her stubbies had a design reflecting her favorite Disney character – the Little Mermaid!

Now Rilynn is a 5-year-old kindergartener. Before starting school, she decided that she wanted to have “tall legs” in order to be the same height as her peers. Rilynn and her family worked with orthotist/prosthetist Sabrina Jakobson Huston, CPO, at the Portland Shriners Hospital to get Rilynn conventional prosthetic legs that have knees that bend and distinct feet that allow her to wear shoes and have her toenails painted. Once again, Rilynn chose the Little Mermaid as the design on her prosthetic legs.

When asked what activity she’s looking forward to trying with her new prosthetic legs, she jumped at the answer. “I’m going shoe shopping!”

“This is really important for her, especially going into kindergarten at a public school,” said Rilynn’s mom, Janell. “She’s going to have a knee that bends, shoes to wear and toes to paint.”