At a festival in Evansville, Indiana, in 1970, a Shriner helped a young girl who was using wooden crutches. That act of kindness was captured by a newspaper photographer. Shriners call the image the “Editorial Without Words” because it so clearly captures the bond between members of Shriners International fraternity and Shriners Hospitals for Children, the health care system they support as their official philanthropy. And this year, we celebrate its 50th anniversary.

Bobbi Jo says the treatment she received at Shriners Hospitals for Children made it possible for her to move around without depending on a wheelchair. 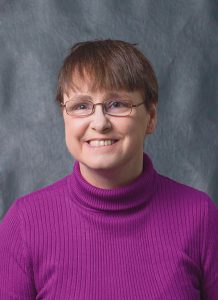 In spite of her condition, Bobbi Jo said, she was able to attend college. “It was the first time I was away from home,” she said. “I realized that I could live on my own.”

The Editorial Without Words opened doors for Bobbi Jo. “I never dreamed that I would be traveling, speaking and telling my story,” she said.

Bobbi Jo, now in her 50s, enjoys reading and relaxing with adult coloring books, when she isn’t traveling on behalf of Shriners Hospitals for Children. Her next project: writing a book about her life.

Bobbi Jo, who oversees the prayer ministry at her church, has a message (paraphrased from Psalm 139:1-18; Ephesians 3:20) for others going through challenges: “No matter who you are or what you are going through, God wants to take you on the most amazing journey, weaving together the most beautiful story of you to make a difference in this world – a difference only you can make – if you will let Him!”