As Zach approached the starting line for his first 50-kilometer (about 31 miles) ultramarathon this past spring, his thoughts drifted back to his time at Shriners Hospitals for Children — St. Louis.

He was born in 1984 without part of his right leg and was cared for at the St. Louis Shriners Hospital his entire childhood. When Zach was 22, he discovered a love for running, eventually becoming a sponsored long-distance athlete outfitted with a futuristic prosthetic blade.

He often thinks back to the days when he had to regularly visit the hospital to replace prosthetic legs he seemed to break again and again. “They would always say they liked to see the broken and dirty legs because it meant you were living life,” he said. 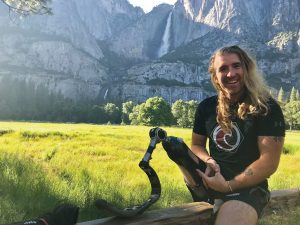 Zach runs to show kids what is possible.

Zach is definitely living life – all while helping others find purpose in their own lives. With every race he competes in, more people learn about the charity he started in his California hometown, the Mendocino Movement Project, which seeks to unite people who want to start moving, whatever their condition. Every time he posts a training video, he hears from young people, most with leg injuries or conditions, who look to him for inspiration.

“I get to be that person I didn’t have as a kid,” Zach said.

“I was disappointed for maybe 30 seconds,” he said. “But then I thought, ‘This is kind of like life. Sometimes you expect things to happen that don’t, and all that’s left to do is to get back up and try again.’”

And so that’s what Zach will do. He’s training for September’s Lake Sonoma 50. This time, “50” isn’t in kilometers – it’s in miles.

Listen to Zach tell his story in his own words: