Orthopedic surgeon was a patient, too 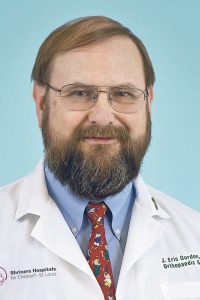 Eric Gordon, M.D., was first introduced to the field of orthopedics when he was a newborn in central California. But of course, he wouldn’t come to understand that as his life’s calling until years later, when he became a doctor in the field.

When little Eric was diagnosed with club feet, his parents sought immediate help. Months of casting were followed by a heel cord lengthening around the time of his first birthday. That surgery would be his first of six. His diagnosis and treatment influenced much of Dr. Gordon’s childhood. His orthopedic surgeon became a regular character in his journey.

So it made perfect sense that Dr. Gordon chose to study medicine and eventually pediatric orthopedics. A fellowship opportunity brought him to Shriners Children’s St. Louis and Washington University. That was in 1993. As they say, the rest is history.

“I enjoy building things. My grandfather was a carpenter, and I always wanted to be involved with him growing up. I tell people orthopedics is glorified carpentry,” Dr. Gordon explained. “I like the thought process in how to make things function better.”

Six decades after his initial diagnosis, Dr. Gordon can still remember what it was like to be a kid with an orthopedic problem. His memories include glimpses of great success and other moments of awful discomfort. So as a provider, he always keeps patient comfort top of mind.

Often, while in clinic or before surgery, he’ll share his own medical journey with patients and families as a show of solidarity and empathy.

“You’ll always find me trying to talk to the kids on their level. I always ask, ‘What questions do you have for me?’” he said.

It’s a small gesture with a big consequence: empowering a child to own their experience. “There is immediate gratification for me in the almost instantaneous ability to help a patient,” reflected Dr. Gordon. “And who doesn’t love working with kids?”