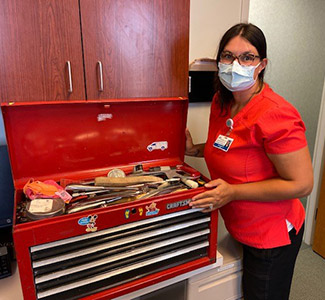 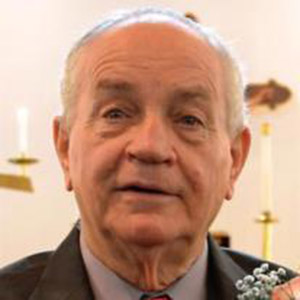 Marvin D. Hohbein was a prosthetist at Shriners Hospitals for Children — St. Louis shortly before he passed away in 2015.

Growing up, Ashleigh Bentz of Springfield, Missouri, said her childhood “looked a little different.” Born with fibular hemimelia, Ashleigh was missing a fibula in her right leg. She was a patient at Shriners Hospitals for Children — St. Louis throughout her first 18 years of life, and at age two, her leg was amputated.

While most people may not look back at their many childhood hospital visits in such a positive light, Ashleigh found solace at the St. Louis Shriners Hospital and considered it her safe haven.

“I frequently went to the St. Louis Shriners Hospital for new legs or adjustments, and that became a safe place where others looked like me, and they understood how I felt about looking different,” she said. “In Springfield that didn’t happen – at school that didn’t happen. No one looked like me. At Shriners, I felt like I fit in.”

The bonds that shape us

As a patient, Ashleigh’s visits always took her straight to the orthotics and prosthetics department within the hospital. It was there that found her favorite prosthetist, Marvin D. Hohbein, who was also missing a limb.

“Marvin was a staple at the St. Louis Shriners Hospital – all his patients loved him,” she said. “He was my ‘leg man.’ He was an amputee. He had corny jokes. I remember Marvin teaching me things like how to deal with bullies, pranks to pull with your prosthesis, and telling me to ALWAYS have an Allen wrench in my backpack for on-the-go adjustments.” 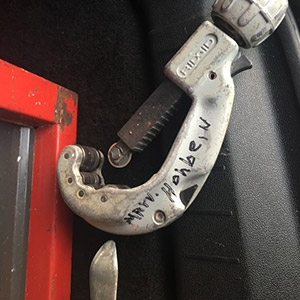 One of Marvin’s tools from his toolbox.

The last prosthetic leg Marvin made for Ashleigh was in 2006, when she was a senior in high school. It was her first leg that ever had a pattern, because her mom never wanted her to have one since “she hated tattoos.” Ashleigh loved that leg, and can still remember every last detail of what it looked like.

Not only did Marvin help Ashleigh through this time of her life, he also helped pave the path for her future career. “Marvin encouraged me to go into the field of orthotics and prosthetics,” she said.

When it was time for college, Ashleigh was not sure what she wanted to do yet. After talking to Marvin, he invited her to job shadow him for a couple of days.

“He gave me a whole bunch of his books”, Ashleigh said. “He told me, ‘I don’t need these, but you’re going to need them.’ And I was like, ‘what?’ He said, ‘yes, you need to apply to go to school for this.’ And there was a technician program at Oklahoma State University, so I went ahead and applied for it. Marvin wrote my recommendation letter. He was so encouraging. He said, ‘if anybody can do this, Ashleigh, you can – you’ve got the personality and you’ve got the heart for people.’ And I remember that conversation so vividly.”

That recommendation letter from Marvin helped Ashleigh get into the program.

“He told me to just be myself and that no matter where I ended up, I’d change lives,” Ashleigh said. “Marvin was a hero without a cape to me.”

Marvin passed away in 2015, shortly before retiring from the St. Louis Shriners Hospital after nearly 20 years of service. He left a strong legacy of caring for children, and was widely known and loved for his kid-themed ties, infectious smile, and down-to-earth, kindly and practical nature. He was a special man to all of his patients, inspiring many of them along the way.

From patient to provider

Ashleigh made a career out of her childhood experience, and has been working in the field of orthotics and prosthetics for nearly eight years, currently serving as a certified orthotic and prosthetic assistant for a hospital system in Springfield.

Even after all these years, Marvin is still making a special impact in her life and career.

Over the past few years, Ashleigh had been keeping in touch with Marvin’s daughter, Holly.  Recently, Holly contacted her, saying she and her siblings wanted to give her something.

“I was gifted Marvin’s toolbox,” Ashleigh said. “I cried. It was surreal – I was so excited to open it. There’s a shoehorn with his name to remove foot shells, a pipe cutter for the pylons to be trimmed, Yates clamps – it’s a treasure trove. I am blessed, and not because of just the toolbox, but because his children shared their dad with so many kids like me and now I’ve got a piece of Marv for the rest of my career. I only hope I’m making him smile from heaven as I tell corny jokes to my patients.”

Ashleigh now keeps Marvin’s toolbox next to her own desk – a reminder that he is still with her every day.

Today, Ashleigh serves as a patient alumni ambassador for the St. Louis Shriners Hospital, speaking at events and Shriners International temples (chapters) to share her story. Last year, Ashleigh raised $2,500 to purchase 671 Barbie dolls with prosthetic legs, which she donated to the hospital to provide to its patients.

“I never had a Barbie that looked like me when I little. I would always snap off their legs,” she said. “I wanted to be able give Shriners patients a doll that looks like them.”

Ashleigh’s husband, Carl, joined the Shriners family six years ago, and became a member of Shriners International, the fraternity that founded and continues to support Shriners Hospitals for Children. “I really wanted him to become a Shriner because of my experiences,” she said, “but he fell in love with it, too.”

When describing what makes Shriners Hospitals for Children so special, “it’s the care,” Ashleigh said. “When you walk in, everyone knows your name. It’s a family.”

Ashleigh’s time at Shriners Hospitals for Children deeply influences how she provides care to her own patients today.

“I learned how to care for people who are different, and we’re all different,” she said. “And I wouldn’t have gotten that anywhere else. That was one of Marvin’s most important lessons for me.”

Ashleigh credits Shriners Hospitals for many of the doors that have been opened for her, which has helped define her life.

“Not only would I not have been able to walk if it wasn’t for Shriners Hospitals for Children and Marvin,” she said. “But I wouldn’t be where I am, or who I am, without them.”