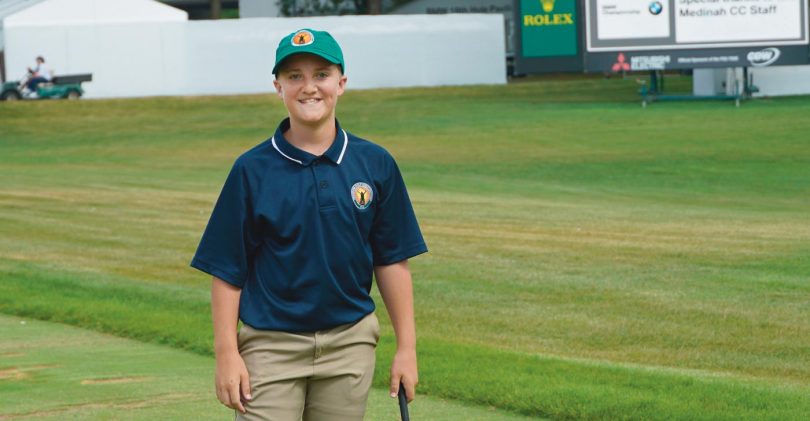 Through their selfless efforts, these kids are making a lasting impact for our patients

No one knows what it’s like to be a child contending with a medical condition or physical difference better than the children themselves. That’s why so many patients at Shriners Hospitals for Children are committed to helping other patients: They’ve felt the impact in their own lives, and they want to contribute. Here are the stories of four young people who have made a difference in the lives of other kids. T.J. shows off some of the toys he’s collected in his toy drive.

“I wanted to give back to Shriners Hospitals because I have gotten so much from them,” said T.J. “I go there, I’m a patient.” The 13-year-old, who has a rare condition known as fibular hemimelia, had his leg amputated when he was very young. Now he and his family make the 200-mile trip from their home in Ammon, Idaho, to Shriners Hospitals for Children — Salt Lake City for new, custom-fit prosthetic legs as he grows. T.J. says being able to walk, run and play sports has helped him gain confidence and feel like he can do anything he sets his mind to. Thinking of his own medical journey, T.J. remembered how much having a special toy meant to him. “You have something that is yours, and you got it [at the hospital]. Sometimes they’re what keep you happy,” T.J. said.

T.J. talked to his father and his school principal about putting on a toy drive. The principal, Gene Smith, was all in on the idea. “It was a great opportunity for our students to give back to some kids who really need some joy in their life,” he said.T.J. invited his school and community to contribute toys, and to his delight, he was able to collect more than 200 of them.

At his next hospital appointment, T.J. personally delivered a few of the toys to fellow patients. “My favorite part was giving a pack of Hot Wheels cars to a boy in a wheelchair. His huge smile was better than anything I could buy,” T.J. said.

Connor is a teen who has found his voice and is using it to help lift up other kids, especially those who have physical differences. Born with a cleft lip and palate, Connor became a patient of Shriners Hospitals for Children — Chicago when he was an infant. Speech-language pathologists there taught Connor’s mother how to feed him with a syringe, giving him strength for surgery when he was just 2 months old. Now age 13, he’s had 13 surgeries to correct his palate, jaw and teeth and help him live a healthy life. Throughout his journey, Connor and his family have maintained a passion for golf. They run an annual golf outing that benefits the Chicago Shriners Hospital’s cleft lip and palate program.

Over time, the event has raised almost $200,000.Earlier this year, he spoke to junior golfers at the PGA Tour BMW Championship FedEx Cup Playoff. “Every time Connor speaks spreading awareness, I realize how far he has come,” said his mom, Kelly. “I think back to when, at times, I could hardly understand what he was trying to say because of his speech. Then I watch him stand in front of, at times, hundreds of people, and I see how confident and proud he is – it makes me cry  every time.” Connor enjoys finding ways to combine his love of the sport with his drive to help others. “Golf is such a cool sport that is filled with all ages, abilities and people,” he said. “With a little hard work and talking to people, we can help our golf game and help people!” Ethan hiked for 19 days and raised $12,000 for the Springfield Shriners Hospital.

For many high school students, summer is a time to hang out and have fun. However, last summer, 17-year-old Ethan, of Conway, Massachusetts, an avid hiker, was inspired to plan an ambitious trek to raise money for Shriners Hospitals for Children — Springfield, in honor of his younger sister, Emily. Ethan was motivated by his double connection to the hospital:

His sister, who was born with a cleft palate, is a patient, and his father, an orthodontist, is a consultant for the hospital. “I wanted to help give each kid born with a cleft lip or palate a smile they would be proud to share,” he said.

Ethan made plans to hike the Vermont Long Trail, a 273-mile footpath that stretches from the Massachusetts/Vermont line to the Canadian border over 21 days. He quickly surpassed his goal of raising$5,000 before he even set foot on the trail. Ethan expanded his goal to $10,000 and began his trek. The trail took him through rocky and dense forest and atop the highest peak in Vermont. He hiked with the sun, sleeping in makeshift shelters and dining on macaroni and cheese and Ramen noodles. In the end, the hike took him just 19 days. He averaged 15 miles a day, and he raised nearly $12,000.

“It’s amazing what Ethan has accomplished,” said Karen Motyka, director of donor development for the Springfield Shriners Hospital. “Not only was this a major personal accomplishment, but his efforts will also help to ensure life-changing care is available to all children.”

The picture of generosity

Ansel sells his photographs and donates the proceeds to Shriners Hospitals for Children.

A teenager who wanted to give back recently had the pleasure of presenting a four-figure donation to the Spokane Shriners Hospital. Ansel, 15, and his older brother, Jonas, both have scoliosis and received treatment at the Spokane Shriners Hospital. With three curves in his spine, Ansel has endured bracing and ongoing physical therapy, which have helped him avoid the need for invasive surgical procedures. When Ansel was just 5 and his brother 10, they founded the nonprofit Through the Eyes of a Child Photography, creating and selling greeting cards that capture the beauty of nature. Ansel’s initial role was “to take awesome photographs and be cute,” as their website says. Ten years later, Ansel has taken the helm of the charitable organization and designated its purpose as benefiting the Spokane Shriners Hospital.

“Being able to combine something that I love doing with a cause that is personally important to me is very rewarding,” Ansel said. The nonprofit donates 100% of its proceeds. Earlier this year, Ansel visited Shriners Hospitals for Children — Spokane to present a $1,500 check – the first dona­tion to come from his ongoing efforts.