Anna made it her mission to donate customized stuffed bears to kids.

Patients give back to Shriners Children’s to show their gratitude

Our patients learn to live with grace and strength in the face of adversity – to face life with determination while overcoming physical challenges. They also want to share that sense of hope and healing with others – often by giving to the health care system that has meant so much to them.

Here are the stories of three young people who have done just that, making a difference in the lives of children and families around the world.

Providing a source of comfort

Anna, 17, is one of many patients who has spine issues in connection with other conditions. She has several diagnoses, including diplegic cerebral palsy and kyphoscoliosis, a spinal deformity that causes the spine to curve both sideways and forward. In December 2019, Anna became a patient of Shriners Children’s Chicago, where she had a complex surgery to help reduce pain and restore function.

The generous teen coordinated a fundraising drive with Higgy Bears, a company that makes stuffed animals customized with spine rods or other medical devices. The bears will go to children with spine conditions who are patients of Shriners Children’s Chicago. “I wanted to donate Higgy Bears to Shriners Children’s because of how much my Higgy Bears helped me while I was recovering from surgery,” said Anna. “I’m excited to give back to the hospital that has given me and many other patients the opportunity to live a healthy and happy life.” 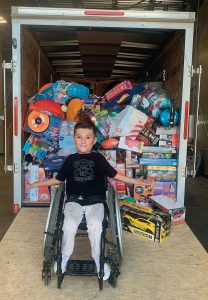 Sebastian celebrates his birthday by giving back.

Sebastian was diagnosed with osteogenesis imperfecta (OI, also known as brittle bone disease) when he was an infant. He has received treatment at Shriners Children’s locations in Salt Lake City, Utah, and Pasadena, California.

Sebastian started “Born 4 Fast,” a charity organization that brings local car communities together to give back to Shriners Children’s. He has organized car rallies to collect toys and school supplies and raised money for both Shriners Children’s locations. “I just want to help make kids’ lives better,” said Sebastian.

He recently celebrated his 12th birthday, and instead of a party with his friends, he organized a car rally and raised $7,000 for the health care system. 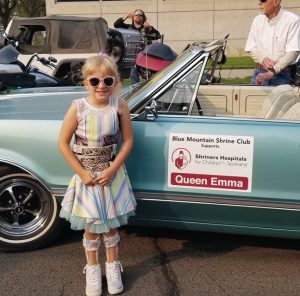 Emma planned to collect monetary pledges and donations based upon miles she walked up until her 8th birthday last spring. In addition, she sold popcorn at her local church to add to her gift.

“She was very proud of herself and overwhelmed by peoples’ generosity,” said Emma’s mother, Billie Jo.

Billie Jo said they created the fundraiser as a way for Emma to stay motivated during her medical journey. Emma was diagnosed with infantile idiopathic scoliosis at the age of 3. Since then, she and her family have made the three-hour drive to Spokane several times a year to see specialists at Shriners Children’s, where she is fitted with customized braces to combat the scoliosis curve.

Shriners Children’s is grateful for all donations – large and small – and for all our generous donors who give so others can have a better life. We especially thank our young donors for their selflessness and compassion. 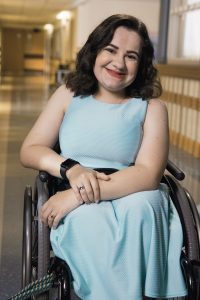 Leigh met her goal to raise $1 million for Shriners Children’s.

A gift of gratitude

Leigh, 21, is a nursing student at the University of Tampa and has been a patient of Shriners Children’s Florida, where she has received treatment for osteogenesis imperfecta – also known as brittle bone disease – for most of her life. Her bones can break very easily, and they have. She’s had 45 fractures and 14 surgeries at the health care facility.

At the young age of 3, Leigh approached life with gratitude. When people asked what she wanted for her birthday, she was quick to say she wanted people to donate money to Shriners Children’s Florida instead of gifts. She also said she wanted to raise $1 million for the health care facility. What started as a small backyard barbecue turned into a spectacular event widely supported by Shriners and the community. Crucial to the success of this annual event was Leigh’s ability to connect with community leaders, sports figures and donors. In the fall of 2015, she reached her goal! She is the youngest donor to have a plaque on the Philanthropic Society Wall at the hospital, honoring her contributions and commitment to Shriners Children’s.

Although Leigh is close to transitioning to adult care, she is determined to continue her lifelong relationship with the Shriners community. She intends to continue to bring awareness to the greater community about the health care system and its mission, as she did as a National Patient Ambassador in 2007. She also plans to pass on the compassionate care she learned from her nurses at Shriners Children’s to her patients throughout her future career. 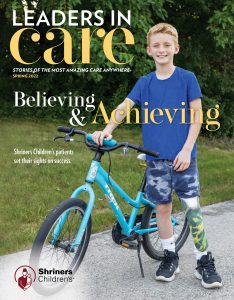