Therapy is a critical element in the recovery and rehabilitation process for patients of Shriners Children’s.

The goals of therapy are to reduce the impact of injuries, disease or developmental delay on a child’s ability to function, and help them perform daily living skills and participate in community activities. Therapists work to improve physical abilities, including motor skills, balance, coordination, strength and endurance. In addition, recreational therapy uses sports, games and activities to provide experiences that improve physical and psychosocial health and the overall well-being of the patients.

Here, we share how therapy has made a difference for some of our patients. 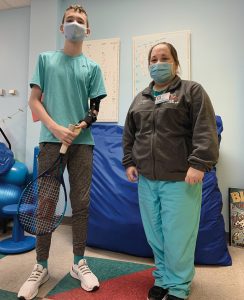 Christian has a special device that has helped improve his tennis serve.

Christian was born with a left arm that was much shorter than his right. He began receiving care at Shriners Children’s in Erie, Pennsylvania, when he was a baby and had the first of many arm-lengthening surgeries when he was 4. Surgeries were followed by occupational therapy, primarily focused on self-care.

Christian, now 14, recently returned to the medical center to be seen by the Pediatric Orthotic and Prosthetic Services (POPS) staff and get fitted for a prosthesis. His tennis coach suggested it might improve his game by allowing him to better serve the ball and have more power behind his serve. They designed a device that allows him to toss the ball up with his left arm and hit it with his right.

“They knew what to do right away,” said Christian. “They fix problems. If a kid says, ‘I can’t do that,’ they find a way to make it work. They are amazing and encouraging.”

As he follows his therapy plan and begins to build strength and coordination in both arms, Christian’s serve will only get better.

“I always want to improve,” he said. “I don’t feel good when I don’t. I also want to prove to people that I can be just as good as them.” 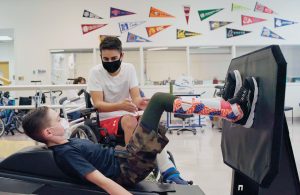 Logan and Bassem developed a friendship during physical therapy.

Logan, 11, was in a car accident that left him with two broken legs: two broken tibias, two broken fibulas and two broken femurs. Three months later, Bassem, 15, was out for a bike ride when he was hit by a truck and dragged for 50 yards. His neck, back, scapula, femur, tibia and fibula were fractured. Both boys underwent multiple emergency and follow-up surgeries at UC Davis Children’s Hospital, performed by Brian Haus, M.D., pediatric orthopedic surgeon and co-director of pediatric sports medicine and joint preservation at Shriners Children’s Northern California. The two boys were later transferred to Shriners Children’s Northern California for physical therapy and rehabilitation, where their friendship ignited. Suddenly, they were no longer alone in their recovery.

“The collaboration between Shriners Children’s Northern California and UC Davis Children’s Hospital allows us to deliver the best pediatric care possible for kids,” said Dr. Haus. “UC Davis is a level one trauma center, and we have some of the most complicated cases that can be addressed over there. The rehabilitation that exists at Shriners Children’s is something that’s truly unique and special. The fact that we can take care of kids at both facilities and give them the best possible care that they need makes us incredibly unique.”

Dr. Haus works closely with Bassem and Logan’s physical therapy teams and ensured the boys were scheduled for physical therapy together from the start. Dr. Haus knew their experiences were similar and that a bond between them would contribute to a faster road to recovery for both of them.

“Logan is the one who is really keeping me going,” said Bassem. “I see him walking in physical therapy now, and that’s where I’m trying to get to. He’s my inspiration.” 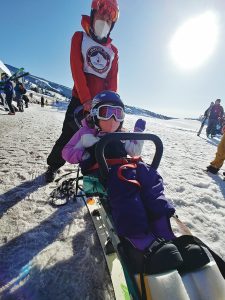 Lucy skis as part of a recreational therapy program.

As part of Shriners Children’s Portland’s recreational therapy initiative, the Adaptive Ski & Snowboard program allows patients of all abilities to have fun on the local mountain, Mount Hood. Until this program, for many of the children, skiing and snowboarding had never been an option. Barriers that patients had experienced may have included their physical condition, the need to use mobility devices like walkers and wheelchairs, the cost of adaptive equipment, a limited number of instructors who are familiar with adaptive equipment and transportation to the mountain.

“They are often told that they can’t do things,” said Caroline Scott, CTRS, recreational therapist. “This is an opportunity for everyone to be told, ‘yes.’”

Lucy and her mom, Stacy, are particularly grateful for the program. Lucy, who has permanent brain damage as a result of a bacterial infection, uses a wheelchair in her everyday life. But on the mountain, she’s easily able to keep up with her peers with the help of adaptive skis and trained volunteers.

“She is elated,” said Stacy. “On the way up here, she was shrieking, she was so happy. It breaks my heart with happiness because it’s awesome to have something like this that makes her feel so included. There are no words.” 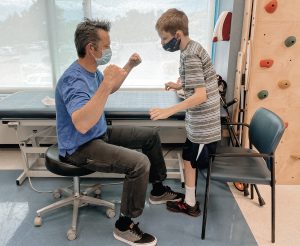 Physical Therapist Mark Lange has seen Travis through many struggles.

Travis has neurofibromatosis, a rare disorder that has caused tumors to fill his leg for most of his life. A patient of Shriners Children’s Salt Lake City since he was 3, Travis has gained the ability and confidence to navigate things many people take for granted, like walking up the stairs.

Physical Therapist Mark Lange has been a constant throughout this journey. Over many years, therapy sessions helped Travis learn that he could use his left leg to support himself and make his muscles stronger, even though the tumor completely invaded his left thigh and hip.

That all changed earlier this year, when his femur broke from just 9 pounds of pressure. So, at the age of 14, Travis made the decision to have his leg amputated. His therapy appointments are now focused on strength and recovery.

As his physical therapist, Lange is always on Travis’ side and, while helping Travis become more independent and confident, has witnessed him face many difficulties most people will never experience. “He’s a really brave young man,” said Lange. “I’m always impressed with how he pushes himself through the things he doesn’t believe he can do. And that allows him to achieve his goals and continue making progress.”