It was Dec. 25, 2017, and Kristin wasn’t where she had thought she would be – at home with her family, exchanging gifts and preparing a holiday meal. Instead, the Tennessee woman was huddled in a van, nervous and scared, as strangers drove her and her young son to a hospital six hours away. Braxton, 3, had an open burn wound from weeks before that was getting worse.

The trip was a leap of faith for Kristin. Two weeks earlier, at his grandmother’s house, Braxton had reached for a pot of boiling water. The scalding spill left second-and third-degree burns on nearly 70% of his body, including his scalp.

The next few days were a blur. At the local hospital, Braxton was sedated. “He could not open his eyes or sit up,” his mother recalled. “His wounds would stick to the bed linens overnight, and each morning they had to unstick him.”

Kristin received support and thousands of messages through a prayer chain. One stranger’s words stood out. “She said she thought Shriners Children’s could help him, and we needed to get there,” Kristin said.

“They left their families on Christmas to take care of my son and me,” Kristin said. “I can’t describe how heartwarming that is. There are really good people in this world.”

The drive was just the start of the support the organizations provided, Kristin said. She left home unprepared for the colder Ohio weather, so the Shriners and hospital staff found her a winter jacket and gloves. They made sure Kristin could stay by Braxton’s bed but also provided a private room so she could sleep.

The biggest impact was on Braxton.

“He was a completely different child the next day,” Kristin said. “They bandaged his burns correctly so they wouldn’t stick. He was looking and acting so much better, more like himself.”

Braxton doesn’t remember much about the bandages, needles or doctors. But he remembers how the staff made him feel. In a word: special. “I got ice cream and hot dogs whenever I wanted,” Braxton exclaimed.

After a month, Braxton went home. But he was never gone long, returning for skin grafts and other surgeries.

Kristin said she had the staff ’s support, even when not at the hospital. “I would get worried about how something was healing,” she said. “So I would call and send pictures and ask a lot of questions, and they always helped and never made me feel bad.”

The strength of that support system was tested when Braxton started elementary school, and other children were quick to notice the scar and thin hair on his head.

“He would come home crying,” Kristin said. “He started dreading going to school. Other kids would tease him. The teachers kept asking him what happened, and he didn’t want to talk.” 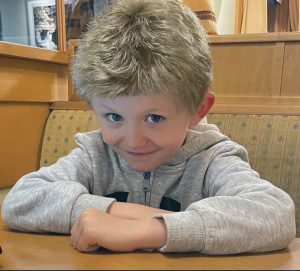 Shriners Children’s Ohio helped Braxton get fitted with a custom hairpiece. Funding for such hairpieces is made possible through the generosity of donors, particularly the Dr. James Russell Myers Fund. Kristin said she sees the impact of that donation every day in Braxton.

At Shriners Children’s, this special attention is called wrap-around care, and it means the care team is concerned not just with medical treatment but with every patient’s overall well-being.

“I have seen his confidence really change,” Kristin said. “He talks more and is more outgoing.”

Braxton agreed, saying he likes to show off his hair and that it comes with an added bonus. “I can take it off when I get too hot,” he said. 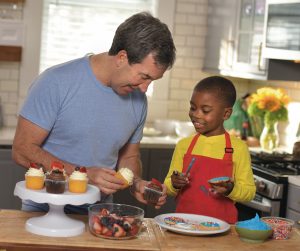 Ntangwe found Shriners Children’s with the help of his medical guardian, Erik.

Ntangwe was 18 months old when he fell into a scalding pot of hot water his mother used for cooking in his Namibian village. Having no knowledge of Shriners Children’s, or any connection to the United States, she treated his wounds the best she could. But given the severity of his burns and the lack of access to proper care, this resulted in horrible scarring on Ntangwe’s legs.

Erik, who traveled to Ntangwe’s village to help build houses and run water pipes, met Ntangwe when he was 3. Ntangwe’s mother showed Erik his severe burns and asked him for help.

A chance meeting on a flight home with a retired nurse led Erik to Shriners Children’s in Galveston, Texas. After months of red tape, Ntangwe made his first trip with Erik to the U.S. in June of 2018, and he had his first surgery to remedy his scarring and improve his mobility last summer.

Ntangwe is now 9 and enjoys being the newest member of the Shriners Children’s Texas ambassador family. As for Erik, he loves being Ntangwe’s medical guardian in the U.S.

Safety in the kitchen

Nobody knows exactly how many scald burns happen because of soup and noodles, but care providers in burn units and emergency departments across the country agree that these injuries are among the most common burns they see in children. “There continues to be a steady rate of hot soup burns in children,” said Sally Martens, FPN, a member of the burn team at Shriners Children’s Northern California. “We see at least two to three noodle soup burns each week.”

Often these burns affect the lap and genitals, Martens said, when children who are sitting down knock over a container onto themselves. Other dangers that can cause kids to drop hot items in their laps include hot cups that burn their hands and flimsy containers that bend in their hands.