How Shriners Hospitals helps children with this condition grow and thrive 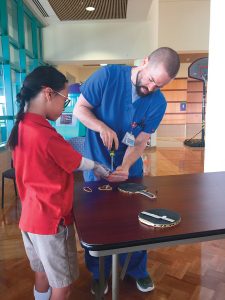 After seeing several doctors, Libbie and her parents found the Houston Shriners Hospital. Her treatment for arthrogryposis has given her family hope.

Libbie, 12, has been receiving care for arthrogryposis at Shriners Hospitals for Children — Houston since she was 3. The following is an excerpt from a letter from her mother, Shelly: We adopted Libbie in 2011 from China. She was 3 years old. We were told she had a corrected clubfoot. When we arrived in China, we knew immediately she had more than a corrected clubfoot. She was not able to walk or stand unassisted. We were not sure what her medical condition was, but we were very concerned. in the U.S., we saw several orthopaedic doctors. They were not familiar with her condition and mostly handled sports injuries. A client suggested that we reach out to Shriners Hospitals.

“When we first visited Shriners Hospitals for Children — Houston, we found ourselves in the most amazing place on Earth. The incredible staff knew almost immediately what our daughter’s con­dition was, and for the first time since our adoption, we felt hope and love.

Libbie was diagnosed with arthrogryposis, and we were given a treatment plan. But more than that, we were given a support network. We were connected to other families in our situation, reas­suring us that Libbie was going to thrive.

Libbie was asked if there were areas in her daily life that could be improved. She said she loves to play ping-pong but has difficultly holding the paddle for extended periods. So her orthotist designed a custom brace with a ping-pong paddle.”

What is arthrogryposis?
Arthrogryposis multiplex congenita (AMC), or simply arthrogry­posis, is a condition in which joint contractures – the tightening or shortening of muscles and joints that can lead to rigidity and immobility – are present at birth in two or more body areas. It affects one in 3,000 people. There are more than 400 specific conditions associated with arthrogryposis. What those conditions seem to have in common is a baby’s lack of movement in the womb. When a fetus can properly move, the muscles and ligaments are stretched. When something goes wrong and movement in utero is limited, contrac­tures may occur, leading to arthrogryposis.

Providing help
While the effects of arthrogryposis vary individually in terms of severity, children with this condition need a lot of medical attention, including intervention by an orthopaedic surgeon as soon as possible.

Libbie’s doctor and the Houston Shriners Hospital Chief of Staff, Douglas Barnes, M.D., said they took a coordinated, multidisciplinary approach to her care. Libbie saw a physician, prosthetics and orthotics team and a rehab team. “For Libbie, asymmetry in motion about her knees led to an awkward-appearing walking pattern,” Dr. Barnes said. They used bracing and heel wedging to maximize her range of motion and help her achieve a more fluid and efficient walking pattern.

While every patient at Shriners Hospitals for Children receives a personalized care plan tailored to meet their individual needs and goals, generally, treatment for arthrogryposis may include splints, casts, orthotics and/or surgery, as well as an intensive program of physical and occupational therapy dedicated to helping kids achieve maximum mobility and independence. Finding support from others with similar experiences can also be invaluable. Harold van Bosse, M.D., orthopaedic surgeon at Shriners Hospitals for Children — Philadelphia, is on the board of directors and is medical advisor to Arthrogryposis Multiplex Congenita Support, a support group for families living with AMC. “The peer-to-peer support that families gain is phenomenal,” he said. “Arthrogryposis may be an uncommon condition, but with this support group available throughout the U.S. and abroad, families are brought together by the commonality of arthrogryposis.”

Research efforts to find answers
As a rare disease, arthrogryposis is not often represented in research. Shriners Hospitals for Children has begun a four-year multisite research effort to establish a registry that will serve as the foundation for providing innovative and evidence-based therapies.

The information from the registry will help answer important questions about the different kinds of arthrogryposis, how these conditions affect children and what kinds of treatments may be effective. The data collected will advance our knowledge of early detection, effectiveness of treatments and genetic causes. With its multicenter, collaborative approach, the study will be able to recruit a large number of patients with this rare condition, making the data extremely meaningful. See more about the research cen­ters involved in this effort on page 8. 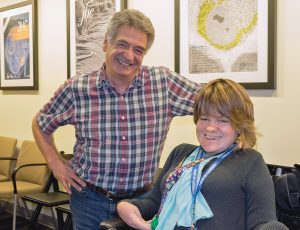 Jennifer, who is studying bioinformatics and computational biomedicine at Oregon Health and Science University, was born with AMC. She has joined the research team at Shriners Hospitals for Children — Portland as a student researcher and will be studying this condition.

Jennifer moved to Portland to work with Ronen Schweitzer, Ph.D. Dr. Schweitzer, interim director of research at the Portland Shriners Hospital, is a leader in tendon development and tendon biology research. Since AMC is a condition defined by joint contractures, these studies are incredibly applicable to the study of arthrogryposis.

“I was really struck by Jennifer’s positive energy and how fiercely independent she is,” said Dr. Schweitzer. He said the Shriners Hospitals for Children system is the ideal place for Jennifer to conduct her research. “Very little is known about arthrogryposis,” he said. “While it’s a rare condition, we currently have close to 3,000 active patients (in the Shriners health care system) who have arthrogryposis. While she’s here, she’ll be in an environment that will allow her to work in both clinical and fundamental research and have access to system-wide AMC initiatives at Shriners Hospitals.”

TO LEARN ABOUT obtaining care at Shriners Hospitals for Children, visit shrinershospitalsforchildren.org/shc/refer-a-patient.