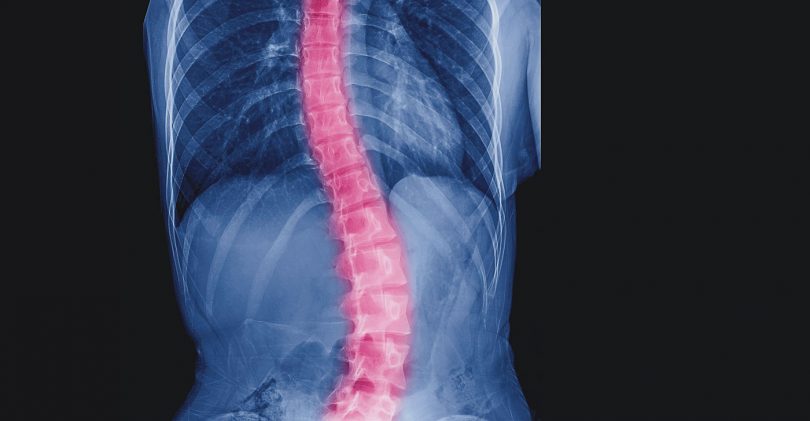 Learn about the symptoms, detection and treatment for this disorder

Scoliosis is a musculoskeletal disorder that causes an abnormal curve of the spine or backbone. The medical condition is indicated by the curvature of the spine from side to side, sometimes resembling an “S” or a “C,” rather than a straight line.

There are different types of scoliosis, including:

Scoliosis can be hereditary; it is recom­mended that a child who has a parent or sibling diagnosed with idiopathic scoliosis receive regular checkups for early detection.

Children and teens with scoliosis rarely exhibit symptoms, and sometimes the condition is not obvious until the curvature of the spine becomes severe. Sometimes you may notice that your child’s clothes are not fitting correctly or that hems are not hanging evenly. In some cases, your child’s spine may appear crooked, or his or her ribs may pro­trude. Look for the following signs, which could be indicators for scoliosis:

An app for early detection

As there is often no known cause for scolio­sis, early detection is the best way to prevent curve progression. To help with this, the orthopaedic specialists at Shriners Hospitals for Children developed the SpineScreen app, which is available on iTunes and Google Play.

With the SpineScreen app, you can perform a preliminary spine check by simply moving your phone along your child’s back. The app detects abnormal curves, giving parents a quick way to routinely monitor their child’s spine health. As this is strictly an initial check, it should be followed up by a physician’s examination to determine if your child has scoliosis.

“Because there is often no known cause, routine monitoring for scoliosis is an import­ant part of a child’s ongoing health care,” said Amer Samdani, M.D., chief of surgery for Shriners Hospitals for Children — Philadelphia. “It’s a progressive condi­tion, so early diagnosis is key. At Shriners Hospitals, our care ranges from routine monitoring to some of the most advanced treatments for scoliosis. The earlier we see a child, the more options we have available.”

Some children with mild spinal curves may require no treatment. For those who do need treatment, your primary pediatrician may refer you to an orthopaedic spine spe­cialist, who will recommend the best plan of treatment based on your child’s age, stage of growth, the degree and pattern of the curve, and the type of scoliosis.

Shriners Hospitals for Children offers a wide range of treatments for scoliosis, tailored to the needs of each individual patient, including:

Observation: For children with an idio­pathic curve that measures less than 20 degrees, physicians may follow patients through observation and examine them every four to six months while they’re grow­ing. At this point, no treatment is needed other than the follow-up examinations.

Bracing: Most physicians recommend their patients be fitted for a brace to prevent a curve from worsening when the patient meets the following criteria:

As the child nears the end of their growing period, the specific indicators for bracing will depend upon how the curve affects their physical appearance, whether the curve is getting worse and the size of the curve.

Casting: There are various forms of serial casting that are a possible treatment for some patients with infantile scoliosis and a progressing curve. The casting straightens the spine through the continuous applica­tion of force. Casting can be an alternative to bracing, especially when there are compliance issues. Patients must undergo anesthesia when cast changes are required, generally every two to three months.

Scoliosis-specific exercise (Schroth-based programs): For patients with adolescent idiopathic scoliosis, the exercise program is a conservative treatment option designed to maintain or minimize curve progression and improve posture and appearance. Patients participate in several sessions and then continue the program on their own. Patients may still need to wear a brace.

Treatment for scoliosis is available at the Shriners Hospitals for Children locations that treat orthopaedic conditions.

TO LEARN MORE about VBT and other treatments for scoliosis, please visit shrinershospitalsforchildren.org.