With her braces, Emilynn not only can walk, she’s also a competitive hip-hop dancer.

From the very start, Emilynn’s family knew she was special. It would take almost a decade to learn exactly how special she is, though.

“We had a completely normal pregnancy with Emilynn,” her mother, Morgan, said. “She was born at 36 weeks, so she just spent a little time in the NICU [neonatal intensive care unit] because of respiratory issues.”

As Emilynn grew, though, her feet began to turn inward, a condition called clubfoot. After the child had undergone multiple surgeries, doctors told Morgan something she just wouldn’t accept.

“The more they did, the worse she seemed to get,” Morgan said. “A doctor told me that the surgeries weren’t successful and Emilynn would never walk, that she’d use a wheelchair for the rest of her life. They told me that I needed to just come to terms with that.”

But Morgan wanted a second opinion. “My mom instinct told me that it wasn’t simply clubfoot and that they weren’t looking at every possibility,” Morgan said.

A change in course

When she was about 2½, Emilynn, who lives in Ohio, had her first appointment with Vishwas Talwalkar, M.D., a pediatric orthopedic specialist and surgeon at Shriners Children’s Lexington in Kentucky.

“Dr. Talwalkar changed the trajectory of her whole life in that first appointment,” Morgan said. “He told me it would be a long process, but that he thought Emilynn could walk someday. That’s all I needed to hear. It reassured me that my instinct was right.”

They did not know yet what was causing Emilynn’s orthopedic problems, but Dr. Talwalkar was able to help by developing a plan involving custom ankle-foot orthotic (AFO) braces and surgical intervention.

“She took her first steps when she was 4, and by 5, she no longer needed a wheelchair,” Morgan said.

Genetic testing eventually gave the family some answers. Emilynn has a rare genetic condition called Distal Spinal Muscular Atrophy, or DSMA, which is characterized by weakness and wasting of the muscles and primarily impacts the arms and legs.

Now Emilynn gets the care she needs for her condition, including orthopedic care at Shriners Children’s Lexington.

Emilynn wears custom braces built by Pediatric Orthotic and Prosthetic Services (POPS) – Midwest at Shriners Children’s Lexington. The braces help support her ankles and straighten her feet. Emilynn’s insurance only covers one set of braces a year, but Shriners Children’s provides care, including replacing prosthetics or orthotics as needed, regardless of families’ ability to pay. Morgan said she’s been thankful over the years to not have to worry about the cost of her daughter’s care.

“She comes every six months to get new braces because she is so active that she literally destroys them,” Morgan said. “We’ve never outgrown a brace. She always is ready for a new one when we come because she’s able to do so much that she snaps a strap or cracks them.”

Morgan has gone on to pursue a career in pediatric nursing because of her and her daughter’s experience.

“I knew what it was like to not be heard as a parent,” she said. “I didn’t want others to feel that way, and I’ve told many parents who felt hopeless that Shriners will be there for them.”

While Morgan sings Dr. Talwalkar’s praises every chance she gets, Emilynn’s perseverance and her family’s support has been integral in her successes, too.

“Emilynn would not be where she is today if it weren’t for Dr. Talwalkar and Shriners,” Morgan said. “But we’ve also never made her feel like anything was impossible. She’s always been curious and wanted to try everything her big sister does. It might take her a little longer to do it or we might have to do it a little differently, but her condition has never held her back.”

Emilynn wants other kids facing difficult physical challenges to know they don’t have to be held back either.

“Dr. Talwalkar never gave up,” Emilynn said. “I don’t give up either. I can walk today when others said I wouldn’t. Don’t let anyone tell you that you can’t.”

Emilynn, now 12, does much more than walk. She shimmies and shakes on stage as a competitive hip-hop dancer. She jumps and stomps on the sidelines as a cheerleader. She throws strikes on her bowling team, speeds down the driveway on her bike, swims the length of her family’s pool and scores a goal or two on the soccer field.

“All these things that some other parents might take for granted have meant so much to us,” Morgan said. “We watched Emilynn climb the steps of the school bus on her first day of kindergarten when we thought she’d have to be lifted into the bus in a wheelchair. Her first soccer game and the first time she took the stage to dance, I just cried because at one point we were told she would never do those things.” 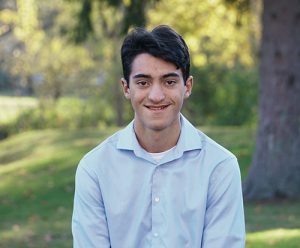 Griffin will soon have his final surgery for cleft lip and palate.

Born with cleft lip and palate, Griffin has been treated at Shriners Children’s Boston for most of his life. His parents learned their baby would have the condition during an ultrasound when his mother, Jennifer, was 24 weeks pregnant. Now a student at the University of Florida in Gainesville, Griffin is an avid golfer who also enjoys video editing and production. He is scheduled to have surgery on his jaw this summer, which will be his final surgery. Jennifer believes the challenges of managing a cleft lip and cleft palate diagnosis made her family stronger. “As I look back on our experience, I truly feel that Griffin’s cleft lip and palate was a gift,” she said. “We never took our health for granted, and we never judged people based on their physical appearance. We feel like part of the Shriners family.” 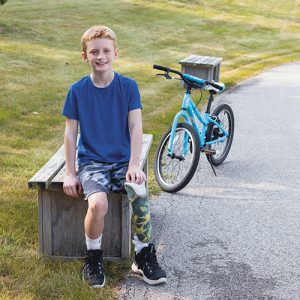 Tommy learned to ride a bike with his prosthetic leg.

Doctors told Tommy’s parents at their 20-week ultrasound that he had a rare condition known as fibular hemimelia, a missing lower leg bone. “These doctors had only seen this condition three times ever,” said MaryKay, Tommy’s mom. But the family found hope at Shriners Children’s Chicago. Jeffrey Ackman, M.D., an orthopedic surgeon there, said, “Families are reassured to learn their child’s rare condition is nothing new to us.”

Tommy’s family and care team eventually decided that amputation and a prosthetic would allow him the best quality of life.

Tommy, now 10, is the youngest of four siblings and loves to be outside. MaryKay said that for years, Tommy couldn’t quite master how to ride a bike with his custom-made prosthetic leg. His parents felt like he was missing out, even though their son happily ran along while his friends rode bikes. During the pandemic, Tommy found the confidence to learn to ride with his special leg! Now his family jokingly calls him Lance, as in Lance Armstrong.

Yakobo was able to avoid amputation with alternative surgeries.

“Well, yeah, we can make you walk better again.” Orthopedic Surgeon Bryan Tompkins, M.D., of Shriners Children’s Spokane, spoke the words Yakobo’s family had crossed the globe to hear. When he was very young, Yakobo, who is from Tanzania, sustained a severe leg injury that healed improperly. Doctors in Africa suggested amputating his leg below the knee. Seeking an alternative, Yakobo’s family moved to the United States when he was 4. Through a series of surgeries and observations in the Spokane hospital’s motion analysis center, physicians were able to correct his leg injury and avoid amputation. Now 18, Yakobo is a senior in high school who stays active by boxing in a local club and playing basketball.