Kahari is able to walk again after rehabilitation for a spinal cord injury.

Kahari sustained a spinal cord injury when he was 17.

A healthy, multisport athlete, Kahari played defensive end and linebacker. After a tackle at an August 2021 football practice, he was unable to move his arms and legs. Emergency doctors confirmed he had a spinal cord injury (SCI), which included swelling of the cord and a narrowing of the canal. Over the next few weeks, Kahari began to have some recovery in his limbs. He went to Shriners Children’s Chicago for spinal cord injury rehabilitation treatment about a month after his injury. 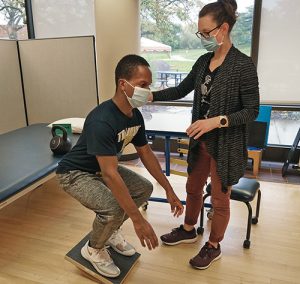 Kahari receives outpatient therapy to build on his progress.

At Shriners Children’s, a team of therapists, physicians, nurses and child psychologists work together on spinal cord injury cases to cover all aspects of a patient’s care. “Initially, Kahari required assistance for all functional activities including self-feeding, dressing, mobility and transfers,” said Nicole Viverito, PT, DPT, a physical therapist who treated him.

Kahari’s dad, Michael, never gave up hope his son would be up and walking. “The therapists – all of them – are great. They wanted to know what Kahari was feeling and what he was experiencing,” said Michael. “When you build that kind of trusting relationship, the child thinks, ‘I really can do this.’”

After two weeks of inpatient care, Kahari was able to begin to walk again.

The family is aware many children with spinal cord injuries may not walk again, and they are grateful for their son’s rapid recovery. “In Kahari’s case, he went from a zero to a 10,” said Michael.

The teen now receives weekly outpatient therapy. “Kahari is able to complete all functional activities. He can walk, run, jump and even throw a football independently. He continues to amaze us with his progress,” said Ashely Umali, MS, ORT/L, occupational therapist. 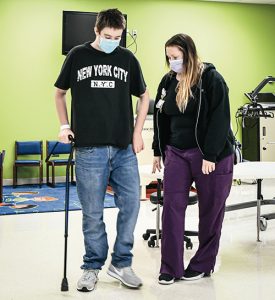 Jesse works with his physical therapist to improve his ability and confidence.

Last spring, Jesse, 14, dove into a pool and broke his neck. He was airlifted to a local hospital.

When Jesse had recovered sufficiently and was ready for a rehabilitation program, his family chose Shriners Children’s Philadelphia because of its reputation for comprehensive, quality, specialized care. They felt strongly that having other young people around him would help Jesse’s morale and drive him to do his best during therapy.

Jesse spent the remainder of the summer in the Philadelphia hospital’s specialty spinal cord injury intensive rehabilitation program. His care team created an inclusive plan that would build up his ability, confidence and independence.

“We cannot say enough positive things about Shriners Children’s Philadelphia,” said Jesse’s mother, Stephanie. “They handled all of his physical needs, of course, but they also took care of everything else by supporting his mental and emotional health.”

Stephanie was also impressed by the different types of support she and her family received during Jesse’s stay and how well the staff prepared them to return home after he was discharged.

“They made sure we had emotional support as well,” said Stephanie. “They allowed us to decorate his room and bring his favorite blankets and food from home. They trained us thoroughly in his care for when he came home and made sure we had all the equipment we needed.”

In less than two months, Jesse was able to walk, using forearm crutches, out of the doors of the hospital to his family’s car. This experience alone was far more than Jesse ever expected when he first came to the hospital.

In addition to providing care for children with spinal cord injuries, Shriners Children’s conducts research to understand the long-term impact of these injuries and ultimately offer even better treatments, insight and assistance. 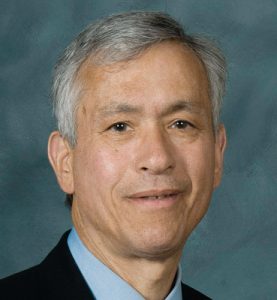 Participants include former patients ages 19 and older who sustained a spinal cord injury as a child and received SCI rehabilitative care at one of three Shriners Children’s SCI programs, which are located at our hospitals in Chicago, Philadelphia and Sacramento, California. To date, over 520 current and former Shriners Children’s patients have participated. Seventy-five of them were injured more than 30 years ago.

Kathy Zebracki, Ph.D., took over as principal investigator 10 years ago. “There is no comparable study that has followed such a large population of individuals with pediatric-onset SCI longitudinally into adulthood,” said Zebracki. “Knowledge of psychosocial outcomes, such as attainment of employment, is critical to developing targeted state-of-the-art interventions addressing the current needs of aging adults living with SCI, as well as creating effective evidence-based rehabilitation and educational/ prevention programs for those newly injured.”