Clara is being treated with Mehta casting for her scoliosis.

At Shriners Children’s, scoliosis treatment plans include a variety of options, tailored to each patient

Clara is about to undergo another medical procedure at Shriners Children’s Lexington for infantile scoliosis, a condition causing her spine to curve into an “S” shape. She’s had more than a dozen procedures in her short lifetime. But instead of acting nervous, Clara is calm, and so is her mom, Kayla. “It was very scary at first,” said Kayla. “But Shriners Children’s has done a really great job of making me feel better and giving me a game plan.”

At Shriners Children’s, our philosophy is to consider all options for each patient. For children with scoliosis, this ranges from scoliosis-specific exercise therapy, casting and bracing, to the most advanced surgical treatments, such as growing rods, vertebral body tethering (VBT) and spinal fusion. Our multidisciplinary teams work with patients and their families to create custom treatment plans that will allow patients to return to the activities they enjoy as quickly and with as little pain as possible.

Clara is being treated with Mehta casting. The cast is applied in the operating room with the patient under anesthesia and goes from below the arms to just below the waistline (for some patients, it may also go over the shoulders). Each cast is worn for two to three months, with a brief break in between. The number of casts needed and time taken to achieve correction varies in each case.

Following the Mehta casting series, patients wear a removable brace as needed. While Mehta casting corrects spine curvature for some children, for others it may serve to delay curve correction surgery until the child is older.

“The Mehta cast attempts to harness the natural growth of the child’s spine and chest to try to correct their scoliosis,” said Vishwas Talwalkar, M.D., of Shriners Children’s Lexington. “The advantage of the casting over bracing is that you can actually gain correction rather than just maintain.” 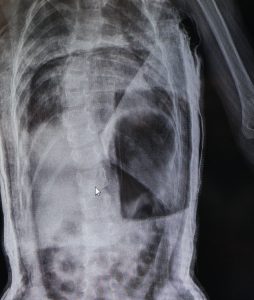 Clara’s X-ray shows the curve in her spine.

When Clara first came to Shriners Children’s Lexington, she had a 50-degree curve. At her visit in July, it was down to 18 degrees. The goal is to reach 10 degrees or less with casting or bracing. For Clara, who also has a fluid-filled cavity at the bottom of her spine called a syrinx, the road to a straighter spine might also involve surgery.

Clara’s family has talked to Dr. Talwalkar about the possibility of MAGEC growing rods and, as her body reaches maturity, perhaps a spinal fusion. The MAGEC rods are surgically implanted to help straighten the spine and are lengthened externally as a child grows using a magnetic remote control held over the spine, reducing the need for repetitive surgeries. 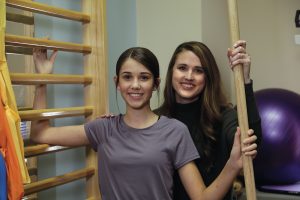 Gabbi stands taller after receiving treatment for her scoliosis.

For some patients with scoliosis, treatment may include wearing a brace. Sometimes bracing is combined with a special kind of physical therapy called SSE, scoliosis-specific exercises.

That’s the case for Gabbi, of West Fargo, North Dakota. Her parents first realized something was amiss when she was 11. As they watched Gabbi swim, they noticed her shoulder blades appeared to be at different heights and wondered if she had scoliosis. They downloaded the Shriners Children’s SpineScreen app and scanned Gabbi’s back. The app revealed that her spine had an abnormal curve, so they made an appointment at Shriners Children’s Twin Cities.

Gabbi was diagnosed with scoliosis and, due to the progression of the curvatures three months later, received a custom brace. In addition, Gabbi participates in SSE, using exercises, stretching and breathing to help improve her posture. Since starting treatment, Gabbi, now 14, is on her fifth brace, her curvatures are correcting, and she has grown more than 11 inches.

Gabbi considers her treatment at Shriners Children’s an awesome experience and is eager to share her story with others who may be going through similar situations. “They have a whole plan for scoliosis care, and I love that they look at every option for each kid,” said Gabbi.

Gabbi’s mom, Mandii, agrees. “Shriners Children’s makes you feel like you are their only patient, and your child’s treatment is the only thing they’re worried about,” she said. 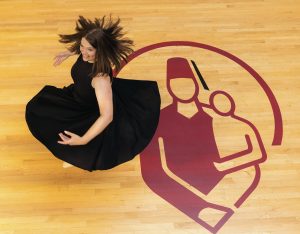 Chloe is back to dancing, thanks to her care team.

Sometimes a patient’s scoliosis is severe enough to require surgery.

Chloe, an artist and dancer, was diagnosed with idiopathic adolescent scoliosis when she was 11. Shriners Children’s Chicago Chief of Staff Purnendu Gupta, M.D., explained that the diagnosis is done through a clinical exam, a neurologic exam and X-rays. “Here at Shriners, we have EOS technology, which is a way to do X-rays with less radiation,” Dr. Gupta added. 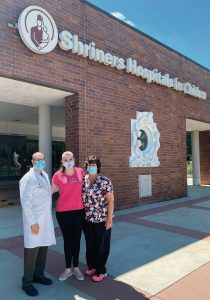 Chloe is back to dancing, thanks to her care team, including Dr. Gupta (left), and Linda Cree, RN, BSN, CPN, CCM (right).

Eventually, Chloe needed spinal fusion surgery, which Dr. Gupta performed, and she was officially cleared to return to dance just over a year later. “I’d like to say thank you to Dr. Gupta for fixing my spine and for putting up with me every time I asked when I could go back to dance,” Chloe said. “You’ve been so kind, and I am forever grateful for what you’ve done for me.”

Chloe’s journey with Shriners Children’s continued when she needed the Chicago hospital’s sports medicine care. About four weeks before spinal fusion surgery, she fell and dislocated her kneecap because her balance was off due to her scoliosis. Chloe saw Orthopedic Surgeon Kelsey Davidson, M.D., and had reconstruction surgery. 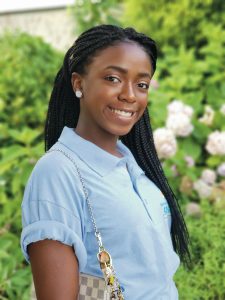 For patients who meet very specific criteria, an alternative to spinal fusion called VBT may be an option.

That was the case for Trinity, now a freshman in college who has been cheerleading since she was 8. When she hurt her knee and needed to see an orthopedist, her mother, Shavonda, asked about the curve in her spine that Trinity’s pediatrician had noticed at a recent visit. That’s when Trinity was diagnosed with scoliosis.

Her parents researched the best place to go for innovative, fusionless scoliosis procedures and discovered Joshua Pahys, M.D., and the team at Shriners Children’s Philadelphia. Trinity had VBT surgery in June 2016. Post-surgery, she felt better than she had in a long time, her lower back pain was gone, and she had a straight spine.

VBT straightens the spine using the patient’s growth process. It is a less-invasive procedure than spinal fusion and preserves mobility.

Medical staff at Shriners Children’s Philadelphia, led by Chief of Surgery Amer Samdani, M.D., developed the methods and techniques for VBT and worked closely with numerous stakeholders to bring the technology involved in VBT to approval.

Trinity was able to return to cheerleading six weeks post-surgery. She competed as an Urbana Varsity Cheerleader and a Level 6 All-star Cheerleader for the Maryland Twisters. She also has been a Rebel Athletic Model and has promoted the cheerleading athletic brand around the world.

For more information about scoliosis, including the various types, visit myleadersincare.com.