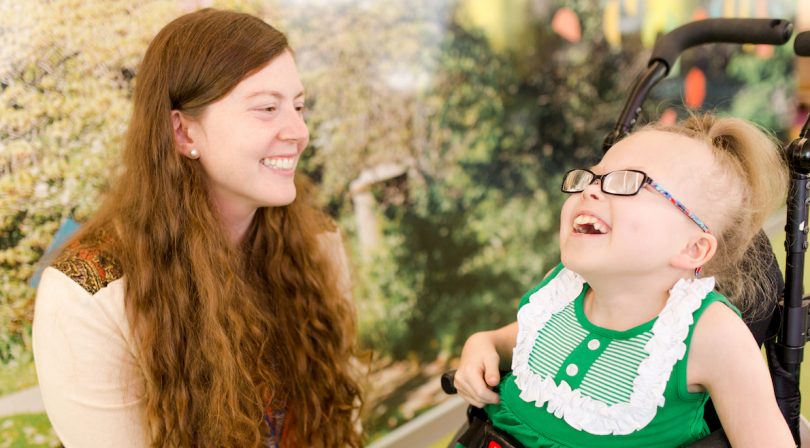 Creative hobbies give many patients a way to express themselves

“Hi everybody, this is your girl, Grace Anna!” That’s how the little girl likes to start her videos, looking into the camera with confidence and joy. “Today we are going to sing Into the Unknown by Elsa,” she announces. With a deep breath and an emphatic downward swing of her arms, she begins those four ethereal, mystical notes from Frozen II, so familiar to many little girls: “Ah ahh ah ahhh,” she sings.

Grace Anna, 9, a patient of Shriners Hospitals for Children Medical Center — Lexington, has been singing since she was 22 months old, said her mom, Angela. Like many Shriners Hospitals patients, Grace Anna finds strength and solace through creative endeavors, such as music.

Making a difference with music

Grace Anna was born with chondrodysplasis punctate, a group of disorders characterized by the formation of small, hardened spots of calcium on the “growing portion” of the long bones or inside other areas of cartilage in the body.

Her condition is also commonly associated with disproportionate and asymmetric shortening of long bones, curvature of the spine and short stature. Grace Anna receives medical care from 14 different specialists, including the orthopaedics team at the

Shriners Hospitals Lexington facility. Through it all, she keeps singing. Her performances include singing the national anthem at sporting events and singing at church, and she even appeared on Katie Couric’s show, Katie, when she was 3. Her favorite song is Amazing Grace.

“Music helps her face the mountains she has to climb, such as surgeries and therapies,” her mother said. “When she’s scared, she sings to ease her fears. Singing is her outlet to express who she is and to help her make a difference in this world.” 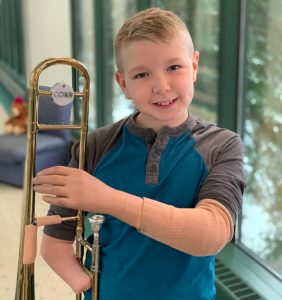 Nick uses a prosthetic hand to play the trombone.

Nick, 11, who was born missing both of his hands, also finds joy in music. “I like music because it has always made me feel good,” said Nick.

Knowing their son’s love for music, his parents wanted him to be able to play in the fifth-grade band. After thinking about which instrument would be best, his teacher and parents opted for the trombone.

Nick and his family, who live in Nebraska, worked with the team at Shriners Healthcare for Children — Twin Cities to identify the best prosthesis. They selected a standard prosthetic hand, which would provide the stability needed to hold and play the trombone. A Shriners Hospitals outreach clinic in Boys Town, Nebraska, helped make the process easier for Nick’s family – instead of traveling back to Minneapolis to have Nick fitted with his prosthesis, follow-up care was available closer to home.

What’s it like being in the band? “It is nice to be like everyone else,” said Nick. “Being in band is also a lot harder than I thought. Learning the notes has been a challenge. “I like to play the trombone and sing, because I can do that and stand out for doing it, not stand out because of my disability.” 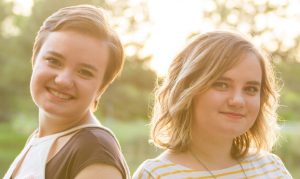 Katelyn and Aubrey use embroidery as therapy.

For some patients, a creative activity can have therapeutic benefits. That’s the case for twins Katelyn and Aubrey, 18, who have received care at Shriners Hospitals for Children — Salt Lake City for multiple hereditary exostoses (osteochondromas), a rare condition that causes tumors to grow from the growth plates of long bones. Effects of the condition can include pulled muscles, dislocated and bowed bones, and stunted bone growth. It can cut off circulation and can make movement difficult.

After some corrective surgeries, Katelyn’s left arm bowed from using crutches, and it was discovered that her left ulna (a bone in the forearm) had not grown fully. She stopped using her arm due to the pain, and her hand started to cramp from the disuse. When their older sister taught the twins how to embroider, Katelyn fell in love with the craft.

For Aubrey, embroidering seemed like it might make things worse. As she saw how much it was helping her sister, she gave it another try. “I wasn’t the best embroideress, but it helped calm my nerves and exercise my hand like one giant muscle.”

Shriners Hospitals for Children — Salt Lake City Occupational Therapist Roxann Beauregard was impressed by the sisters’ efforts. “The primary goal of occupational therapy is to help a person participate in activities that are meaningful in order to facilitate their health and well-being,” said Beauregard. “As Katelyn and Aubrey embroider, they not only have less pain, but they feel a tremendous sense of accomplishment, fulfillment and joy.” 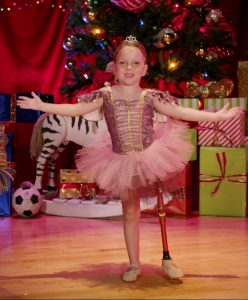 Getting into the groove

Dancing is another way some Shriners Hospitals for Children patients enjoy life and express themselves. One young dancer is Sarah, who was born without a left leg and hip. Her parents were told by many doctors that she would never crawl, walk or even roll over. Then her family was referred to Shriners Hospitals for Children — Erie, where she received her first prosthesis when she was 2. Sarah started walking before long, but she wanted to dance. Sarah started ballet as therapy, but it has given her so much more. It has helped her physically, improved her self-confidence and given her the chance to build friendships with other dancers.

“Dancing has been a tremendous therapy for her,” her mother, Jocelyn, said. “Dance is her whole life. She loves it.” Sarah, now 8, has appeared in many productions and has performed in Moscow Ballet’s Great Russian Nutcracker.

“Sarah’s love for dance is the reason she’s so productive,” said care manager Sue Birkmire, RN. “It motivates her to be independent, and she has used it as a way to overcome obstacles.