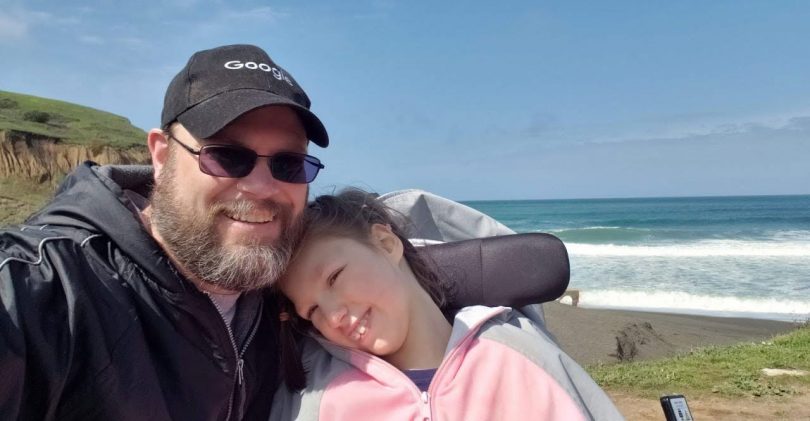 When all hope seems lost, parents can find the help they’re searching for at Shriners Hospitals

They were the words no family wants to hear. After a traumatic birth, doctors told Jillian’s parents that a lack of oxygen had caused brain damage and that if she survived, their daughter would have a poor quality of life and would never be able to live independently.

Devastated, Jillian’s parents decided not to accept that assessment and continued to hope for the best. “We weren’t happy with that news,” her father, Mick, said. “So we made the determination to prove them wrong and give her a good, happy life.”

They took their baby home and cared for her. As Jillian grew from infant to toddler to little kid, they pushed her in her wheel­chair and connected with her by reading the expression in her eyes. Her parents recognized her spark, but whatever she had inside, she couldn’t communicate.  Jillian’s parents continued to look for options, moving to different states and work­ing with different therapists and hospitals, but never finding the improvement they wanted. In Portland, Oregon, the physical therapist at Jillian’s school urged them to visit the Portland Shriners Hospital for Children.

There, Jillian began receiving speech, occupational and physical therapy. And Jillian’s world began to open up. To help her communicate, therapists provided a special communication device. For Jillian and her parents, it was a revelation. “Up until the point of coming to Shriners Hospitals, everyone treated her like a baby,” her father said. “She couldn’t speak; she couldn’t prove her cognitive abilities because of her physical ailments. So now she’s getting more and more respect as a typical 9-year-old who just happens to have physical disabilities.”

To help her move independently, the hospital set Jillian up with a power wheelchair. “Things like that added to her independence that nobody ever saw on the radar for her,” Mick said. “She uses her head switches, and she can navigate wherever she wants to go instead of depending on someone else to push her around.” Now the light her parents always knew was within her shines openly. “She’s a little jokester,” Mick said. “She loves telling jokes, and she’s the class clown at school. She’s just really come to life with the added communication and technology.”

Finally, Jillian’s parents had found what they believed all along was possible. “We’ve had access to all these different specialists in other locations, but we’ve never had the success that we’ve had here,” Mick said. “She has much better self-esteem, and she has this drive to keep pushing herself even more,” Mick said. “With physical therapy, she may never walk, but she’s making more advances toward doing things physically that she wasn’t capable of in the past. The amount of independence and growth that we’ve seen in the last two years has been absolutely incredible.”

Vivian found help at Shriners Hospitals and is now a competitive swimmer.

Help is right there

Vivian’s mother knew what her baby was experiencing wasn’t typical. For years, Dorota tried in vain to find help for her daughter. “No one listened to me. They told me it was possibly in my head,” Dorota said. But she knew it wasn’t. When hydrocephalus was suspected, tests and doctors ruled it out. Symptoms such as low muscle tone and hypermobility (when joints easily move beyond the normal range) developed, and Vivian’s head was growing rapidly. She also had an abnormal walk and deformities in her ankles and feet. In addition, Dorota said, “If Vivian hurt herself, she would not stand on her leg. I had a deep feeling there had to be a cause of all of this.”

Dorota continued to pursue treatment for Vivian, but the mystery deepened. Possible diagnoses were considered and ruled out. When the little girl complained of back pain, they tried physical therapy and, eventually, X-rayed her spine. Dorota said that although an orthopaedic doctor didn’t see anything in the images, a radiologist detected multiple compact fractures in her vertebrae. Vivian was 4 when the diagnosis finally came: Vivian had osteogenesis imperfecta (OI), also known as brittle bone disease.

The rare condition causes bones to break easily, and children with OI typically have dozens of fractures growing up. Dorota went online to find more information and connected with a parents’ group from the OI Foundation. When she mentioned she was from Chicago, she said, the referrals came immediately: “You have Shriners Hospitals and Dr. Smith right there,” she recalled hearing.

Peter Smith, M.D., is a pediatric orthopaedic surgeon who is nationally recognized for his expertise in treating children with OI and other rare bone conditions. At the hospital, in addition to seeing experienced medical care providers, Vivian has access to advanced technology that can help monitor her bones, such as the DEXA scanner. This machine is helpful for pediatric patients because it captures images faster and uses a lower dose of radiation than other machines.

Although she has had more than 40bone fractures, she doesn’t let those tough breaks slow her down. One of her favorite activities is competitive swimming, and she is the Illinois multi-ability state champion in several events. “I now tell all my friends to come to Shriners Hospitals for Children — Chicago for orthopaedics,” Dorota said. “My daughter loves coming here. It feels like a family.”