Kaleb’s journey of overcoming obstacles and making a difference

When Marie-Hélène had an ultrasound, it revealed that her unborn baby had fractures, curved bones and limbs that were much smaller than normal. The doctors suspected osteogenesis imperfecta (OI, also known as brittle bone disease), and they told the parents-to-be to prepare for the worst.

Still, when Kaleb’s parents saw him for the first time, their worries melted away, even if for just a moment. He was an adorable, happy baby. 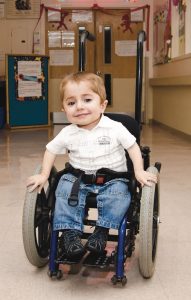 A difficult road ahead

The new parents knew they had a rough road ahead. But their doctors had already been in touch with Shriners Hospitals for Children — Canada in Montréal, Quebec. Kaleb was just 7 days old when Francis Glorieux, M.D., Ph.D., and François Fassier, M.D., Msc. FRCS (C), world leaders in OI treatment and research, examined him for the first time.

However, it was a meeting with social worker Rose-Marie Chiasson that made all the difference. “With Rose-Marie’s help, I was slowly able to accept the diagnosis …She helped me navigate all the frustration, guilt and sadness I was experiencing,” said Marie-Hélène. “From that point on, I felt supported by Shriners Hospitals for Children — Canada. Our family not only received the tools to get over the shock of the birth, but those to help us get through the day-to-day. Despite his pain, Kaleb has never cried when it comes to a trip to Shriners Hospitals.”

Since 2008, Kaleb has had at least 236 fractures and 13 surgeries, with a team of several doctors treating him. 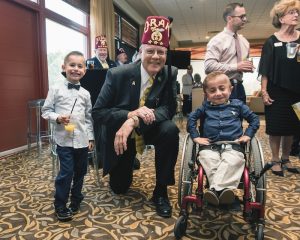 Kaleb has been a part of videos, events and campaigns to raise awareness of Shriners Hospitals for Children.

In 2013, Dr. Glorieux asked Kaleb and his mother to share their story at an annual seminar with an audience of about 100 people. Six-year-old Kaleb was hooked, and a star was born. His adventure as a patient ambassador began.

The photogenic young boy with the bubbly personality happily attended countless photoshoots to help the hospital generate promotional materials, ultimately resulting in a social media following. In 2017, at age 10, Kaleb filmed his first video, a tour of the Canada Shriners Hospital.

Kaleb’s personality shines through in everything he does. “He enjoys the satisfaction of knowing that he’s helping other kids like him,” said Marie-Hélène. “Being a patient ambassador is also key to building his self-esteem. He realizes how much he’s accomplished at such a young age, and he’s proud of himself.”

Making a name for himself

Kaleb has been part of international campaigns, promotional videos, public service announcements and fundraisers for Shriners Hospitals, as well as for other causes. His work has helped raise money for the OI kits the Canada Shriners Hospital distributes to families.

As a patient ambassador, Kaleb also takes part in the hospital’s annual golf tournament. In 2020, this event wasn’t possible due to the pandemic, so Kaleb and his friend decided to create a virtual lemonade stand. Through the power of social media, the fundraising campaign brought in $77,000 for Shriners Hospitals. Kaleb has contributed so much to our health care system and is a shining example of the Shriners family spirit. 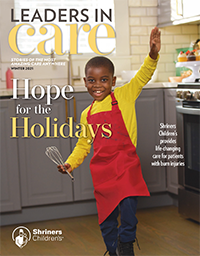