How parents are changing our patients’ lives

Mike adopted his son, Nick, when Nick was 16. Nick has severe dystonia, a form of cerebral palsy marked by involuntary muscle contractions and movements that affect his entire body. He uses a wheelchair and is nonverbal. “But he can understand what you’re saying,” Mike said. Nick receives physical therapy, occupational therapy and orthotics (for hip dislocation), and bracing for scoliosis at Shriners Hospitals for Children — Springfield. 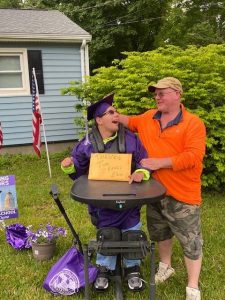 Nick and his dad, Mike, are always in search of new, fun ways to spend time together.

The next great adventure

After his adoption, Nick joined BFit, the hospital’s summer biking program for patients with neuromuscular conditions. “He was really tuned in with what he was doing,” said Mike. From there, a thrill-seeker was born. “BFit is what started it all.”

Mike looked for other adaptive activities that Nick could take part in to live life without limitations. So far, Mike and Nick’s physical therapist have found ways for Nick to go horseback riding, ziplining, rock climbing and water skiing.

“There’s nothing we’ve tried that he doesn’t like. I think you’re just limited by your own imagination,” said Mike. Mike said skydiving might be next on the list. “I’m always looking for our next great adventure.”

Nothing to be afraid of

It’s less than an hour before surgery, and Soumaila is taking deep whiffs from an oxygen mask that gives off the pleasing scent of cake batter. The mask isn’t hooked up to anything. It’s a replica used by the child life department at Shriners Hospitals for Children — St. Louis to help make kids more comfortable before surgery.

“Mama Amy! Mama Amy!” says the 10-year-old boy from the West African nation of Burkina Faso. The woman who has served as his host mom for two weeks puts the mask up to her face and smiles back at the boy who will soon undergo surgery. He slides over and folds himself into her arms.

Amy and her husband, Greg, have served as host parents to five children. She is one of four host mothers currently shepherding international patients through care at the St. Louis Shriners Hospital. 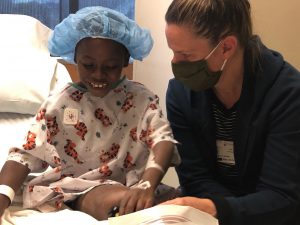 Amy is host mom to Soumaila, a patient from Africa.

Kids who come to the hospital from devel­oping countries are often in grave danger. Lorencia, who was the first child Amy and Greg hosted, arrived in 2017 from Haiti. She was living in an orphanage because it was a safe place for a girl whose legs were so mal­formed that she got around by scooting along in a handstand. “If you have a deformity in some parts of the world, you are completely shunned,” Amy said. “You have to be hidden from your commu­nity. Your life is in danger.”

Lorencia came to Shriners Hospitals with the help of a nonprofit organi­zation. As the care teams provide medical treatment, Amy, Greg and other host parents run the kids to and from medical and physical ther­apy appointments, feed them, clothe them and provide education. Most importantly, they give them love.

The family, including Amy’s daugh­ters Gabby, 21; Claire, 17; and Maura, 14, plays games and records funny videos. At bedtime, they provide comfort; Lorencia has slept alongside Claire during four stays with the family. Maura sleeps on the floor in Soumaila’s room.

“This is all about rewriting their story,” Amy said. “I just house them while the doc­tors actually rewrite their story. And then they go back to their home country, and they can continue rewriting that story by showing their peers and their peers’ parents that they are nothing to be afraid of.”

At Shriners Hospitals for Children, we are made stronger by the parents who guide, nurture and advocate for the children who come to us for care. We are grateful to have these heroes as part of our team.